Much in innovation management revolves around the question of how high-quality ideas can be generated in large quantities as quickly as possible. Most companies now realize that that innovation with employees plays a central role in this is. If one follows the innovation benchmark of the management consultancy PwC, then 60% of all respondents have already identified their own employees as the most crucial component of their innovation strategy - ahead of technology partners and customers. This is also reflected in the development that more and more companies are using broad-based campaigns to create incentives for their employees and managers to contribute their own ideas. The goal: Each individual should assume more responsibility for the company's innovation initiatives. However, to ensure that this rethinking does not degenerate into actions just for the sake of doing so but generates promising innovations in the long run, several challenges need to be solved.

One of the most urgent problems is often to be found in the innovation process itself. Whether it is a classic workshop, a modern Open Innovation approach or a sophisticated incentive program, the submission of proposals by employees is only the first step. Often companies then miss the opportunity to provide submitted ideas sufficient space for test phases or concrete implementation. Not only is there is a lack of resources, but also a lack of committees that decide impartially and without prejudice which proposals should actually be implemented. That way many good ideas run the risk of being forgotten again or of collecting dust in the drawers of the employees. The motivation of employees to show more initiative will decrease rapidly as soon as they realize that their ideas have no chance of ever being implemented. Therefore, it is the management's duty to establish an open and transparent process that enables all employees to contribute, that provides the necessary resources for their ideas, and that makes decision-making about implementation comprehensible. 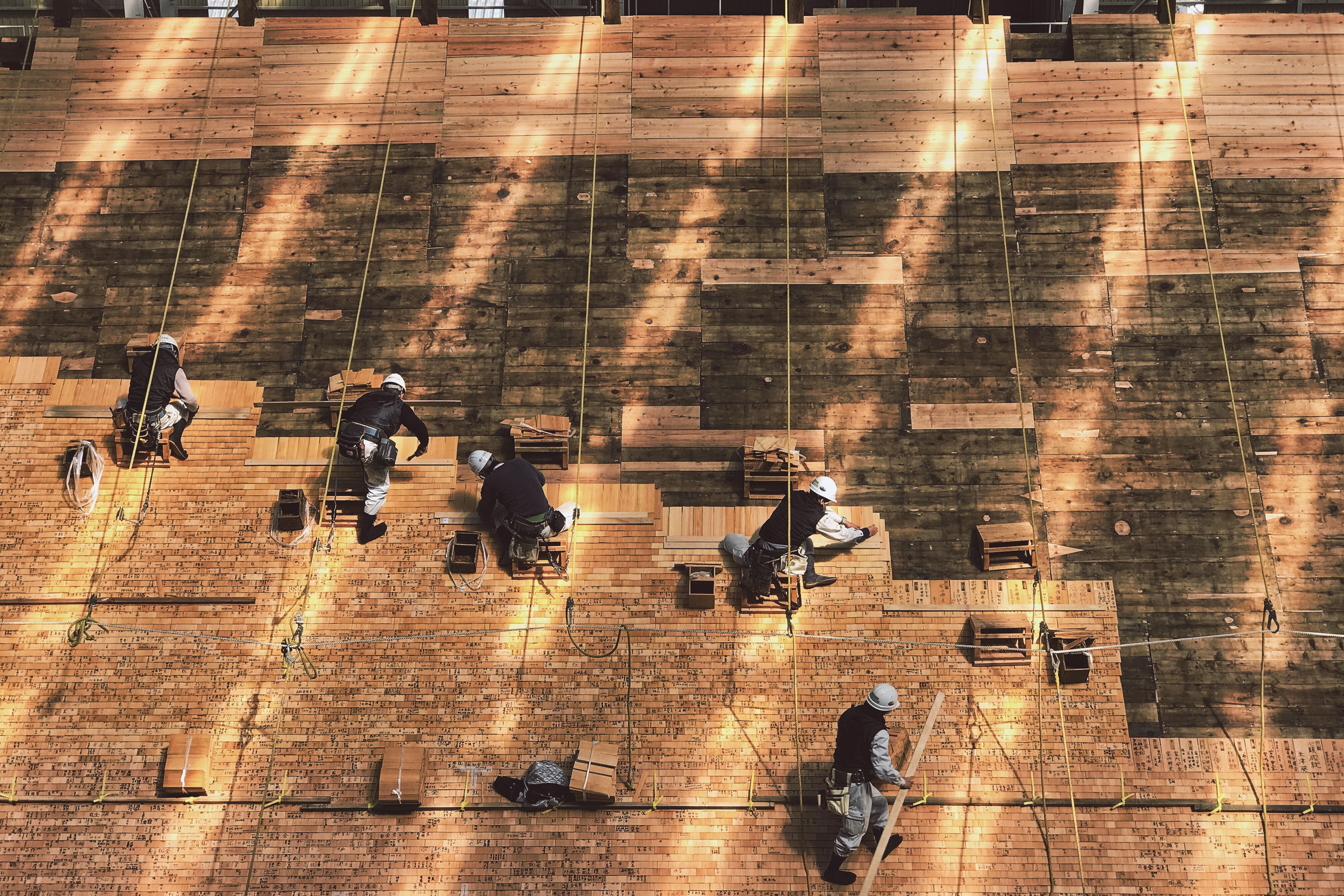 The second major challenge is to align these employee-driven innovation initiatives with the company's overall strategy. However, according to PwC's Innovation Benchmark, 54% of the companies taking part in the study struggle to do so. This is even more dramatic, considering that almost two-thirds of them invest 15% of their revenue directly back into innovation projects. This means that huge sums of money are distributed following the scattergun approach to various research and innovation projects failing to properly set target. Logically, this is not very efficient as only a fraction of the ideas has the potential to repay this investment with sales increases or savings. It is therefore particularly important to identify promising projects at an early stage and separate them from potential failures. This is the only way to approach innovation projects in a prioritized way, to bundle resources efficiently and to drive ideas quickly to implementation.

For companies, a complex dilemma arises but one that can easily be solved. On the one hand, a large number of employees should be motivated to contribute their ideas. On the other hand, it is essential to filter out those ideas that are worth promoting. The solution: Innovation Funding. We explain exactly what is behind it, how it works and what advantages it brings.

The methodical roots of Innovation Funding lie in crowdfunding. Its basic principles are adopted, extended and made applicable for use in innovation management. The term crowdfunding originally comes from the English-speaking world and its composition already reveals a lot about the concept behind it - namely financing by a group of people. It is, therefore, an opportunity for individuals, companies or organizations to obtain capital for projects or business ideas for the realization of which they themselves lack the means. The organization of the projects usually takes place via the Internet. In Germany Startnext and Kickstarter are among the best known and most successful crowdfunding platforms. Idea providers have the opportunity to present and advertise their projects. At the same time, the crowd decides, using its investments, on the success and implementation of the projects. There is a minimum sum defined in advance, which must be reached within a fixed period of time, otherwise the supporters receive their money back.

The supporters receive a non-financial consideration - e.g. a copy of the project result. As it is a type of advance sale, this model is particularly well suited for testing an idea for its market potential.

The crowd will be financially involved in the success of the project. The micro-investments are comparable to equity capital and especially help start-ups and small companies to raise the necessary financing.

The donors receive a non-material consideration - e.g. a public acknowledgement or award. This form is typically used for social and non-profit projects to reach an occasion-related donation goal.

The crowd grants a loan at an agreed interest rate over a fixed term. It is debt capital and serves private individuals or companies as an alternative to the classic bank loan.

A prominent example of a successful crowdfunding project is Virtual Reality. After the first, rather disappointing attempts in the 1990s, technology mostly had been ignored by traditional donors. Almost two decades later, in 2012, Palmer Luckey - an active member of the Virtual Reality Community - launched a project on Kickstarter to raise the necessary funds for a new Virtual Reality Headset. Thanks to the active support of the community for the preparation of the project, the campaign was a huge success. Suddenly Virtual Reality was no longer a forgotten trend but found support by Oculus Rift as a technical pioneer. Oculus VR was bought by Facebook shortly after for over 2 billion dollars and the entire Virtual Reality market experienced explosive growth. All this would not have been possible without crowdfunding.

Crowdfunding, however, is more than just an alternative way to raise funds at favourable terms or to conduct market research. The unique value of crowdfunding is above all reflected in the emotional attachment of the donors to the project. The motivation of crowds to support a project can have many reasons - in most cases, however, crowdfunding connects innovators with those, who need innovation. Instead of having to deal with the interests of banks or venture capitalists, the idea provider has the opportunity of working directly with the community to advance and refine the project. Additionally, the crowd feels, to a certain extent, responsible for the project through direct contact with the idea provider. Many donors want to add their knowledge and skills or use other ways - such as advertising support - to make a positive contribution. These dynamics between project designers and sponsors lead to the development of long-lasting and active Communities, which pursue together the same goal - i.e. to successfully realize the project as fast as possible. The integration of the community creates a commitment for both sides that reduces failures in crowdfunding projects to a remarkably low level.

Crowdfunding exemplarily shows the potential of platforms to act as a permanent starting point for innovations and business ideas. Regarding Innovation Funding instead of private individuals, the employees are the ones taking on the financing. This, of course, changes the underlying process. In general, companies give the initial impetus by presenting a topic on their platform on which employees can submit ideas. The first phase of the process is therefore used for defining a rough framework and collecting ideas without underlying any fixed expectations. Similar to crowdfunding, it must be ensured that the ideas are formulated in detail and contain a concrete objective – it can be the development of a viable concept as well as the construction of a first prototype. Thereby, it can be guaranteed that the ideas are of very high quality and already contain important information regarding the time required for implementation as well as regarding resources and financial means.

All employees have then the opportunity to view the suggestions. They can like their favorites as well as comment on them, offer their help and expertise, suggest solutions or refer to related projects. Through this direct collaboration between the employees, the ideas will be outlined more clearly. Before the campaign starts, companies can then decide how to proceed by defining different phases and gates via the platform. This gives the employees guidance as to where they can get involved and at the same time makes the path of an idea to implementation transparent. Various options are conceivable - but the focus always remains on employee funding. In most cases, the selection for the funding is reduced to a manageable number of ideas through a voting phase, or an expert committee of the company is called in to select according to predefined criteria. Then the innovation funding begins. Of course, the employees do not provide their personal money, but a budget allocated by the company for the respective innovation campaign is used. 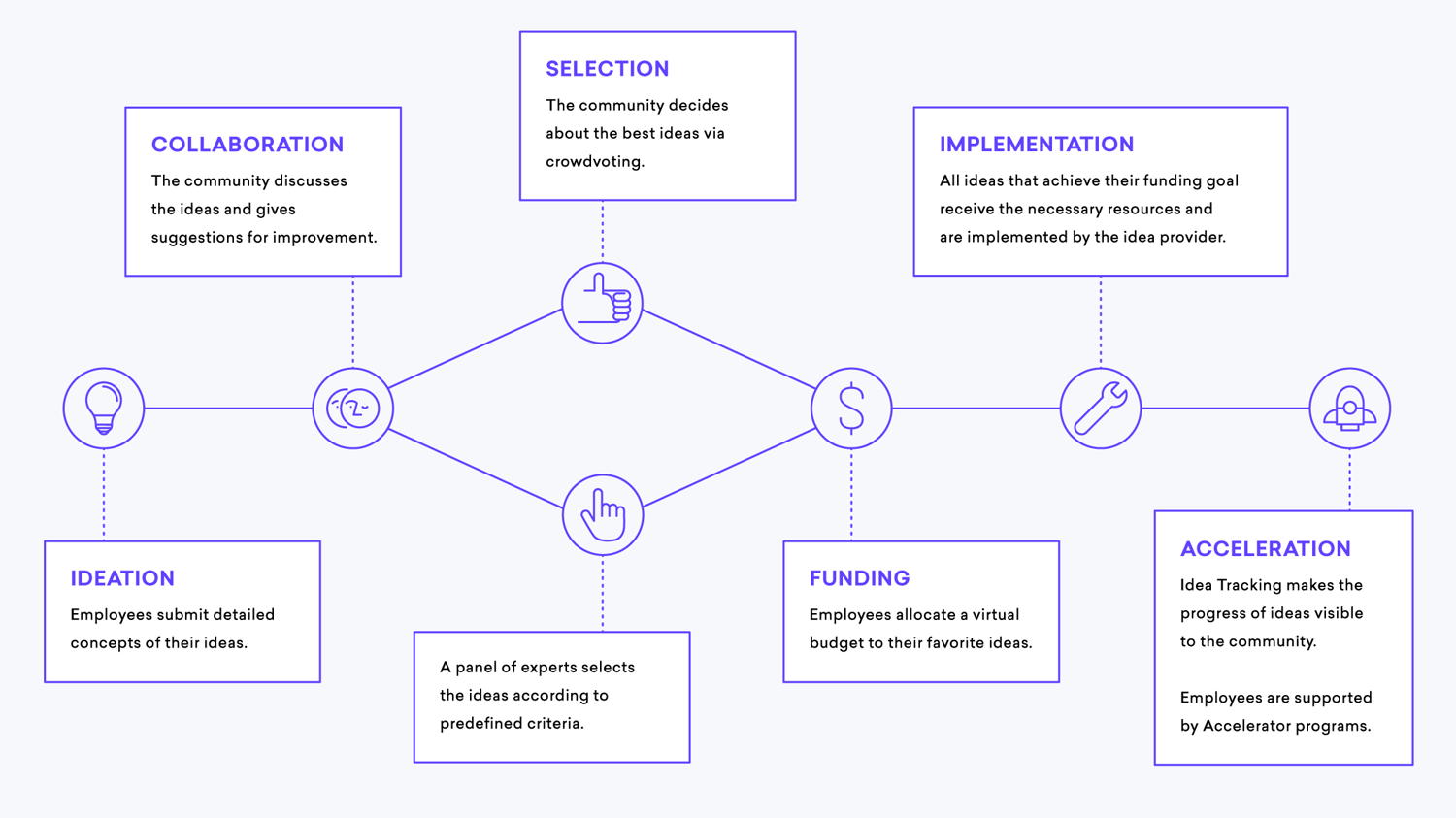 All proposals that achieve their funding goal receive the appropriate resources and are implemented directly by the idea provider. The idea providers do not do this alone, but either initially submit the idea together with a team or the team is formed by a collaborative approach. Innovation thus becomes the task of all employees: From the generation of ideas to the distribution of budgets to the actual implementation. The method is particularly successful when, after financing, the projects including the teams continue within accelerator or incubator programs. This motivates the employees to assume more responsibility for the future of the company and strengthens the entrepreneurial spirit. The open process additionally helps the projects to gain more visibility and reach within the company. Thus, the platform activates a vast pool of people and knowledge that can be integrated into the value chain. The topic of cultural change can no longer be considered a foreign matter but is realized every day in various situations.

Advantages of the innosabi Technology

The great advantage of innovation funding for companies is the tremendous acceleration of the innovation process. A seamless transition - from ideation to actual implementation - makes it possible to realize innovation projects in just a few weeks. From the collection and development of ideas through coordination phases to funding and the construction of initial prototypes, all activities can be handled via a central innosabi platform. This makes innovation with employees fast and agile. Especially in times of disruption and digital transformation, one thing is true: An idea alone does not make an innovation, it depends on the implementation!

Philipp is Marketing Manager at innosabi. He follows the proposition that innovation is nothing abstract, but the tangible result of the human urge for progress and wisdom. Therefore, Philipp is driven to support bright minds and their ideas by promoting the tools and methods required for sustainable success.

More on this topic: Innovation with employees